77. The Book of Chameleons by Jose Eduardo Agualusa 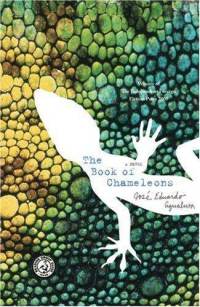 In this totally experimental and unique book, Jose Eduardo Agualusa tells the story of a murder as narrated, in the first person, by a wall gecko. The story involves an albino by name of Felix Ventura, who sells memories to people and help construct people's past, Angela Lucia, a lady who had suddenly become friends with Felix, a foreigner later to be called Jose Bachmann (but actually named Pedro Gouvei) and a wall gecko - a reincarnation of Jorge Luis Borges (according to the author).

The gecko, which shares dreams with its master (house owner), tells of what this master, Felix Ventura does; how Felix deals with the reconstruction of people's past and most of his clients are people whose future is secured; his relationship with women and his fascinating love for books. Then one day Felix was approached by a war photographer, without a name, but with several thousands of dollars and a request to have his past constructed. His arrival into the household also marked the entry of Angela Lucia, also a photographer, into Felix's life and though Eulalio - the gecko - considered this no coincidence, his master saw it that way.

Set in Angola during the period right after the end of the 25-year civil war and Marxism has come to an end and people are trying to reinvent themselves, according to the author, the story tells of how people change their lifestyle according to the dictates of the day and how people who don't go with the flow could easily fall out of grace and be preyed upon by the very establishment they helped built. Pedro Gouvei, the war photographer, was arrested by the Angolan intelligence and sentenced to prison. He was however released and was told that his wife was dead together with his daughter. To make a new life he left the country only to return to have his past reconstructed, to take revenge on the man who killed his wife and lied to him about the death of his daughter. This led to several coincidences and a murder occurred.

Written in several chapters, with each chapter marked by a title that almost summarises what the reader is going to read, this novel could boasts of stylish phrases that is perhaps characteristic of Lusophonic writers. Chapters range from a single page to about four or five pages. The novel is both surreal and real; both logical and illogical. It tries to merge things that should be diametrically opposing into a homogeneous consistency and this the author did without a blemish.

Spawning the novel are quotes and phrases that shows how widely read the author is and it is this introduction to new authors, in addition to the beauty of the write, that made me enjoy this story the most:

"Truth has a habit of being ambiguous too. If it were exact it wouldn't be human." As he spoke he became increasingly animated. "You quoted Ricardo Reis. Allow me, then, to quote Montaigne: Nothing seems true that cannot also seem false. There are dozens of professions for which knowing how to lie is a virtue. I'm thinking of diplomats, statesmen, lawyers, actors, writers, chess players. (Page 122)

I also found two statements which support some of the issues I have raised here, albeit not necessarily a direct message from the author:

You couldn't write a story these days, even a short story, without the female lead being raped by an alcoholic father. (Page 117)

He was an unpleasant  sort of character, professionally indignant, who'd built up his whole career abroad, selling our national horrors to European readers. Misery does ever so well in wealthy countries.

My only problem with the story is that when the blurb promised an 'original murder mystery', I was eagerly waiting for it to happen, thus I read with that in mind and about two-thirds through the novel I still couldn't guess how murder could be part of the story. And when it finally came, almost like the shadow of a passing insect, the story spirals into its denouement. This, somewhat destroyed the enjoyment I should have had from the earlier pages. However, the author brought all the strands together and it is in the last pages that we really get to understand the story fully.
_________________________________ 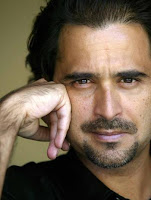 Brief Bio: José Eduardo Agualusa [Alves da Cunha], born 1960 in Huambo, Angola, spends most of his time in Portugal, Angola and Brazil, working as a writer and journalist.

He received three literary grants. One from the Centro Nacional da Cultura in 1997 to write Creole, the second one in 2000 from theFundação do Oriente, allowed him to stay three months in Goa and write Um estranho em Goa and the third one in 2001 fromDeutscher Akademischer Austausch Dienst, allowed him to live one year in Berlin where he wrote O Ano em que Zumbi Tomou o Rio. In the begining of 2009 Agualusa completed his novel Barroco tropical in Amsterdam, while living in the residency for writers, a joint initiative by the Dutch Foundation for Litterature and the Foundation for the Production and Translation of Dutch Literature. (Source)