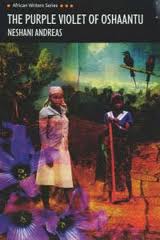 For the African Reading Challenge

The Purple Violet of Oshaantu is a novel that catalogues everything that is absolutely wrong in marriage: extramarital affair, domestic abuse, disrespect, disinheritance, widow-molestation, superstition, economic destitution, and more. Told by Mee Ali, whose marriage is perfect and exemplary, we follow her observations of the marriage life of her friend Kauna, who at the beginning of her marriage to Shange was considered as beautiful as the Purple Violet flower that grows in Oshaantu. However, everything went sour when Shange took on a mistress and began spending his nights away from home. Kauna became lonely, physically and emotionally distressed. She lost respect in the community because her women friends blame her for allowing her husband to leave her for another woman. The community and the Church were almost like bedfellows: showing no sympathy towards her state. In fact the behaviour of the Church and its leader could not be extricated from the larger society. Others also considered Shange's behaviour normal. In all these, there were others who stood for Kauna, like her friend Mee Ali and the 'no nonsense' old woman Mukwankala. When Shange returned one evening from his mistress's house only to die in his chair, all fingers pointed to Kauna. They asked how a man so strong could come home and just die? Add to her misery is her refusal, or inability, to weep because she could not pretend to be affected by her husband's death or that his being away takes something from her life. Perhaps she considered him dead even when he lived. Consequently, she was said to have bewitched her husband so she could inherit his property.

All through the story, we are told, from the perspectives of Mee Ali, about some of the ills within the marriage institution and how most were perpetrated by men and supported by the women. For instance, at Mee Ali's husband's brother's funeral, the widow was maltreated and every item of her dead husband's was taken away from her because the fetish priest claimed she bewitched her husband. Same fate also befell Kauna, though without the participation of a fetish priest.

With the exception of Michael, the men in the novel were either wife-beaters, drunks, or dullards who could not protect the women in their family, whereas the women were hardworking individuals: cultivating farms, selling at markets - after trekking long distances, and open-minded - questioning the rights of women. Perhaps in a society usually referred to as being patriarchal, such issues are pertinent and the questions worth raising and answers worth seeking. Yet, the author also showed women who fight to protect the status and she - the narrator - wonders how they would feel if such fate befalls them too. On the other hand, the author provided her concept of marriage and how it should be through the almost perfect marriage of Michael and Mee Ali. Thus, in such parallel presentation of good and bad, with the bad narrated by the good, the difference became even starker.

Since the novel was narrated by one who was not the main character, but one who observes events because she is a friend of the main character, I somehow felt being on the periphery of the story, never really getting to the core. I really would have loved to know how Kauna, herself, felt, not how Mee Ali thinks Kauna feels or not the stories Kauna had told her, or the things she saw done to Kauna. Accordingly, there were some parts of the narration that were detailedly narrated that one wonders whether the author had switched to an omniscient observer and narrator. And this includes Kauna's thoughts. Other places also stretched and I felt the story lost its substance there. However, this was quickly resolved. 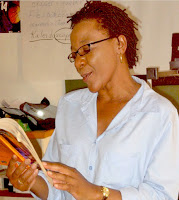 Overall, this novel reads quiet well and I would recommend it to all who work in the direction of women empowerment and also to those men who are like Shange; that is, those patriarchal men who see domination as a status. This is a novel about the quest for humanity not for equality.
_______________________
Brief Bio: Neshani Andreas was born in Walvis Bay, Namibia, in 1964. She trained as a teacher at the Ongwediva Teachers' College. The Purple Violet of Oshaantu is her first novel.(Source)