59. The Shadow of Imana: Travels in the Heart of Rwanda by Veronique Tadjo, A Review 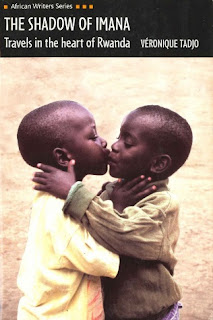 When I embarked on the Africa Reading Challenge I never thought the genre of books I would be selecting would be so varied. But that is exactly what it turned out to be. Veronique's book The Shadow of Imana chronicles a traveller's views, response and reports on the Rwandan genocide and it is the first non-fiction travelogue I have read.

In 1998, Veronique travelled to Rwanda to find out what might actually have motivated the genocide and this book is the product of such an investigation. However, more importantly, the book is more than just a recording of interviews, views and facts. Its prose boasts of poetic tendencies so that the whole section titled THE VOICE reads like a long beautifully written poem. In spite of this readers are warned that there are scenes of morbid description that could disturb sensitive readers. And that is the paradox of the book: beautiful in prose; morbid in description.

The more one thinks about the genocide the more one finds it difficult to believe that two ethnic groups that have lived and intermarried so that mere physical features is not enough to distinguish one from the other could develop such an animalistic animosity against each other to the extent of exterminating husbands, wives and children on the basis of a virtual classification not borne out of any phenotypic expression of ones genetic constitution. As Veronique aptly puts it:

Not all the Tutsis are tall. Not all the Hutus are stocky in build. Because of all the inter-ethnic marriages and the various instances of inter-breeding, those chasing the Tutsis would ask first of all to see identity cards as a means of selecting future victims. (Page 17)

So how could this be? How could these two tribes hate each other so much even if distinguishing one from the other has become almost impossible? And it is a worry that at least one of the answers to these questions involves anthropological features. As Veronique found out:

One of the reasons for the persecution of the Tutsis comes from the theories suggested by European historians, Belgian in particular, who, towards the end of the nineteenth century, attributed to them [Tutsis] foreign origins. According to those historians the 'watussi' shepherds, whom they characterised as tall and slender, in contrast to the smaller Hutu farmers, were not originally natives of central Africa. Some thought they could have come from as far off as Tibet or Egypt. But the link with Ethiopia remains the most common claim. (Page 22)

According to Veronique there is no proof for this theory, yet this claim which initially was made as a form of flattery led to thousands of Tutsis being thrown into the Kagera river so that 'they can return to Ethiopia'.

Yet these same Belgians, who had somewhat laid the foundation for this unwarranted genocide, together with the international community packed bag and baggage escaping a country in which they have come to stay, worked and loved, leaving the people to annihilate themselves. After all who cares? They are just some Africans. And amongst those who left where pastors in whose parishes and churches some of the would-be persecuted Tutsis sought refuge:

The Belgian priest was no longer there when the massacre took place. (Page 13)

Here too, Belgian priests administered the parish: four Flemings and a Walloon. They left just before the massacre. (Page 15)

It is 'interesting' to know that the perpetrators of this hideous crime included many women. So that at the when the killing reached a frenzied apogee the distinction between the sexes became blurred as each sought the offender's blood, whose offence was to be from a different tribe. It should however be stated that there were those who were threatened to kill or else be killed. Under such duress where the only option of inflicting death is to die, many Hutus succumbed. Under the sub-section Two hundred and fifty-three women, Veronique writes:

Women who are murderers, perpetrators of genocide, women forced to kill, accused of having killed their husbands, their children, friends, neighbours, strangers. Women who have helped men to rape, who sang to give them the courage to massacre, who betrayed, who pillaged, who decided to join the acts of cruelty. With machetes, they killed other women, mutilated children, finished off men. (Page 101)

And that is how 800,000 people came to die in approximately 100 days of enraged massacre.

On the side of justice, we are told that about how one hundred and thirty thousand men, women and children - who took part in the massacre either voluntarily or under duress - have been arrested. The challenge however is now on dispatching justice. According to Veronique's report the maximum number of cases that can be handled in a year  in Rwanda with its resources is thousand. Thus, it would take one hundred and thirty years to see to all perpetrators. A mission which, needless to say, is impossible.

The question we need to ask ourselves is, can this unfortunate event happen again - anywhere on the continent? And the answer is yes. All that is required is a country deeply divided along ethnic lines where justice is dispensed along these lines; where people are irresponsible for their speeches. Currently, on a very minor scale, the shooting of Congressswoman Gabrielle Giffords has been blamed on irresponsible speeches by politicians. Currently, Cote d'Ivoire, coincidentally the author's home country, is simmering from political tensions divided along ethnic lines; Sudan is now voting for secession along ethnic and religious lines. So we know it can happen. In fact the Darfur issue has already being described as a genocide. Back to the Rwandan issue, when the Hutu government, which was in power prior to the genocide, The Ten Commandments of the Hutus was published. This document showed who the enemy was, how to destroy the enemy and how not to give up and all that. Yet, the government pretended as if it did not know of its existence. And this was published in a ethnically biased newspaper. So that when the Hutu president - Juvenal Habyariman - was killed in when his plane was shot at and crushed war became inevitable, which was inflamed by the speeches of journalists airing propagandistic messages. I hope we will all read this book and learn a thing or two from the genocide.

I wanted to cut out any detailed description scenes but if I do how could we appreciate how a moment of general/mass psychosis steeped in frenzied killings destroy a country, tainting its historical landscape forever? At a scene of a massacre in a church in Nyamata this is what Veronique writes:

Her wrists are bound, and tied to her ankles. Her legs are spread wide apart. Her body is lying on its side. She looks like an enormous fossilised foetus. [...] She has been raped. A pickaxe has been forced into her vagina. She died from a machete blow to the nape of her neck. (Page 11)

The author's use of the present tense narrative form forces the scene on the reader's mind, which is the most appropriate voice to use in this case.

Brief Bio: Véronique Tadjo was born in 1955 in Paris, but was brought up in Abidjan. During her childhood, she often travelled with her parents and her brother. Her father, who comes from the Ivory Coast, was a high ranking Civil Servant until his retirement and her French mother was a painter and sculptor. Véronique Tadjo has a doctorate in African American Studies. She has travelled extensively in West Africa, Europe, the United States as well as in Latin America. She taught at the University of Abidjan in the Ivory Coast for several years. She has conducted workshops on writing, illustrating books for children and other topics in many countries. Her novel Reine Pokou [Queen Pokou] was awarded the prestigious literary Prize "Grand Prix Littéraire d'Afrique Noire" in 2005. She spent a few years in Kenya and in England, and now lives in South Africa (2010). (Source)