55. Voices Made Night by Mia Couto 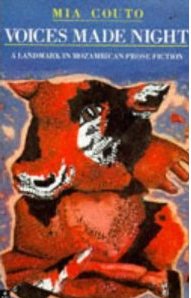 My first encounter with Mia Couto was his story The Birds of God in Contemporary African Short Stories. Having not been disappointed by this contribution, which again is present in this collection, I set forth to read his first collection of short stories, Voices Made Night. This collection of fourteen short stories was the last book I read in 2010 and the first book I review 2011. It also marks the beginning of the Africa Reading Challenge.

From the magical realism of The Birds of God, to the political realities of The Barber's Most Famous Customer, The Whales of Quissico and The Tale of the two who Returned from the Dead, Mia Couto has put together an eclectic collection of stories that is bound to hold a reader's attention until the last word of the last line is read.

Though known for his magical realist stories, themes on struggle, poverty, emptiness and the inequalities that exist in relationships have all been covered in this collection. Broadly, the stories could be put into two categories: relationship, which in itself entails diverse types, and politics. However, behind each of these stories is a compelling narrative style that sucks the reader in.

The Fire, which opens this anthology, tells of a man eagerly digging his wife's grave. In this story, which happens to be my favourite, both husband and wife sees the other to be 'ill' or 'shrinking'; however, whereas the woman just thought about it, the man set out to prepare his wife's grave even though she had not shown any sign of sickness. The Day Mabata-bata Exploded, tells of a different kind of relationship - one between a boy and his uncle, who does not recognise him as a child, assigning him to look after his cattle rather than sending him to school. Then one day the fattest cow meant to be a dowry exploded. In How Ascolino De Perpetuo Socorro Lost His Spouse, the relationship between an alcoholic husband and an introvert wife is explored. So You Haven't Flown Yet, Carlota Gentina explores a long-held belief in most countries - witchcraft. What happens when a man's brother-by-marriage comes to tell him that his (the latter's) wife is a witch, that he has actually caught her in the act? The man convinced that

Witchcraft is a vice of sisters, an illness they are born with (Page 48)

set out to monitor his wife and catch her transfiguring into an animal. Waiting in vain, he mapped out a plan to facilitate the transfiguration process by pouring hot water on the wife. It was only when his wife died from the burns and the man was serving a prison sentence that his brother-by-marriage told him that what he saw was a mistake. In this story and others like it Mia Couto clearly shows his inclination to be the mouth piece of the 'weak: women and children'. He vividly portrays men as weak and minions:

The power of a minion is to make others feel even smaller, to tread on others just as he himself is trodden on by his superiors. (Page 47)

A man seeking a bright future for her daughter tied her to a drum in an attempt to train her as a contortionist. Later he was to learn that the information that contortionists earned more money was false. This is the story of The Girl with a Twisted Future. What happens when a woman decides to marry a man who is bent on becoming a priest? What if the girl, after several visits to the future priest, becomes pregnant? This is a tale that is better read than told and it is the story of The Ex-future Priest and His would-be Widow. In Patanhoca, the Lovesick Snake Catcher, a man described in all ugliness falls in love with a lady. To avoid competitors he surrounds her house with snakes.

Behind all these stories is the political struggle among the white Portuguese, black Mozambicans and Mulattoes. The revolution leading to independence was also prominent in the stories. However, blatant reference to politics was made in The Barber's Most Famous Customer, where a famous local barber was arrested for harbouring a terrorist after he had bragged about shaving a white man's hair by showing a postcard picture of a white man. So that when he told the arresting officers that he was only joking and that it was merely a propaganda to get more customers, they replied:

'A joke, let's see about that. We know only too well there are subversives here from Tanzania, Zambia, wherever. Terrorists! It's probably one of those you put up here.' (Page 113)

And in The Whales of Quissico a disillusioned man set out to find a whale that vomits goods. Waiting for the whale's arrival, the man was visited by his friends who informed him that there was no such whale and that

'... back in Maputo it's being rumoured that [he's] a reactionary

after the authorities perceived his stay at the shore as way to smuggle arms into the country. The Tale of the Two Who Returned from the Dead is a story about corruption, bureaucracy and politics. In this story two friends returned to camp after the village was washed by flood only to find that their names have not been included in the 'not-dead' and so were officially considered dead. It took the intervention of a commission to investigate and establish that they are alive.

'We have closely examined the situation of the two individuals who arrived in the village, and have reached the following formal decision, namely that comrades Luis Fernando and Anibal Mucavel should be deemed members of the population in existence' [...] Next day, [they] began to see to the question of the documents that would prove they were alive. (Page 76)

In The Talking Raven's Last Warning, magic and deceit converge to produce a story that makes it difficult to believe and even harder not to believe. A man vomits a raven that could see into the netherworld and communicates with the dead, at least that is what the man says. Suddenly, people began trooping into the man's house to seek help from the necromantic raven.

Varied though the stories are, a sub-theme of dystopia threads through them all. In each of these stories we find the struggles of everyday life. One thing that makes this collection a fun to read is Couto's skill with words and images. With Couto every word, like the yarn of a weaver, is important, feeding into the overall meaning and strengthening the beauty and appreciation of each piece so that one cannot pull out a word without a domino effect. Writing with poetic ability, lines such as

Happiness stepped out of her life and forgot to return. (Page 83)

The widow wrapped herself in a cloak of sourness, becoming ever more widowed. [...] She would finish when the beer had wetted all her blood. (Page 84)

His voice lay prostrated on the ground. (Page 111)

are bound to stay with the reader. His handling of metaphors, personifications, synaesthesias and many of such literary devices, is unique; this adeptness together with his precise use of language and of diction, makes Mia Couto a must read by all literary enthusiast.
__________________________________
The Fire
The Talking Raven's Last Warning
The Day Mabata-bata Exploded
The Birds of God
How Ascolino Do Perpetuo Soccoro Lost His Spouse
So You Haven't Flown Yet, Carlota Gentina?
Saide, The Bucket of Water
The Whales of Quissico
How Old Jossias Was Saved From The Waters
The Tale of The Two Who Returned From The Dead
The Girl With A Twisted Future
Patanhoca, The Lovesick Snake Catcher
The Ex-future Priest and His Would-be Widow
The Barber's Most Famous Customer

Author's Brief Bio: Antonio Emilio Leite Couto was born on July 5, 1955. At fourteen his poetry was published in the local newspapers. He intended to study medicine but had to suspend his studies to take on become a Journalist in 1974. Eleven years later, after running and head several institutions, Couto entered the university to finish his course in Biology. He has over twenty literary works published in more than 20 countries in several languages including Portuguese, English, French, German, Italian and Catalan. His first publication, in 1983, was a collection of poems titled Raiz do Orvalho. Voices Made Night, first published in 1986 in Portuguese, is his first collection of short stories. His recent publication, a novel, is titled Jesusalem (2009). Sleep Walking (Terra Sonambula, 1992) was considered as one of the top 12 African books of the 20th Century by the Zimbabwean International Book Fair. Having won many awards, such as the first African to win the prestigious Latin Union Literary Prize, Mia Couto now works as a biologist. And still writing.
Anthology Author: Mia Couto Author's Country: Mozambique Rating: 5.5 Review Short Stories Translation Year of Publication: 1981-1990