The Spider King's Daughter (Faber and Faber, 2012; 288) by Chibundu Onuzo is a tale that dissects and spreads open the economic duality - that divide that puts people at the extreme ends of the economic continuum - of most nations, especially those in Africa. It breathes life into an article - Duality: Dickens in Lagos, and Asimov too - I wrote in response to a one-sided argument provided at one of these mentally-skewed journalists.

The Spider King's Daughter is about a happenstance meeting between a girl - Abike - from a wealthy family and a street-hawker, Runner-G and the consequences that came with it. And as you can rightly guess, the chance meeting provided the necessary spark that glowed into love or unlove, as the reader will find out. Yes, these things do happen; and yes, they have been written about since the seventeenth century. But there is more and this is where Chibundu twisted things. As the relationship evolved from street-side meetings to poolside conversations, each party plotted what he or she wanted from the relationship. Though Runner-G was from the lower end of the economic ladder, who had to sell ice-cream to be able to take care of a moribund mother and a teen-sister, due to the sudden death of their father, he was not awed by Abike's wealth. Besides, his mannerisms which was not street-derived and even better than Abike and her coterie of friends kept Abike wondering who exactly 'the hawker' was; what kind of life did 'her hawker' led and lived before this? But Runner-G was taciturn on topics that had to do with his past and was unprepared to scrape even the surface. To him it should remain in the past; at least so he thought, until he discovered his father's letter addressed to his friend and had a discussion with the woman who helped him establish his business as an ice-cream hawker, and Mr T - a ranting madman whose past is as cloudy as his present.

These conversations and the secrets the revealed forced Runner G to reassess his relationship with Abike.

Though the premise - love between rich and poor - has often been traversed, Chibundu breaks more grounds with her characterisation. Abike had everything going for her: she was her father's favourite child, could have anything she wanted, but she was not 'soft', all weakly, and naive in any way. She was 'a chip of the old chip': cunning, fearful, manipulative, and intelligent. She was the only one who could stand up to her father  and win, though she had scores of step-siblings.

When Runner-G was informed by both the security-men at Abike's home and her friends of these traits he set out to find out who the girl really is. The search will unleash dark secrets and an intricate web of deceit and wickedness of which the Johnson's are their key architects. That, truly not all that glitters is gold. The story - read as a metaphor - shows the relationship between the rich and the poor: the manipulation of the poor by the rich; the structure of society itself that ensures that the rich gets richer and the poor, poorer; the near-impossibility of climbing up the social ladder if one was not well-connected. It shows a society run by greed and sustained by brutality. It shows an economy that is fragilising itself by constantly by making socially upward mobility a near-impossibility to millions whilst the few thousands live in plush mansions hidden behind fifty-metre walls and gated communities.

The story is told from the viewpoints of both Abike and Runner-G in the first person. The narrative alternates between the two, which enables the reader to understand what each person thinks or how each interprets same issues and events. Chibundu's descriptions of both wealth and poverty, side by side, is believable and interesting. Juxtaposing Abike and Runner-G makes the reader appreciates the growing gulf between the rich and the poor and the economic and social effects of the gradual squeezing out of the middle class.

The turbulent power-play and politics of the rich, the deadly deals of businessmen who want to have their way with the systems regardless of the rules and who consider themselves near-immortals, the dizziness of a bustling Lagos filled with millions struggling to make ends meet and its traffic, are the environment within which the story is beautifully set.

The dichotomy of economic life also calls for a dichotomous language use - one for the street and those beyond the tall walls of the Johnsons and another for the Johnsons and their ilk - and this the author achieved with perfection. Chibundu's use of pidgin English was not too much or too intrusive. It was just right for what she was describing and it brought the story alive especially when the story was carried by its dialogues and endless descriptions of the characters' thoughts and silences. This is an interesting fast-paced story that captures the current lifestyles of several urban dwellers in Africa. This is a story  that should be read by all.
______________________ 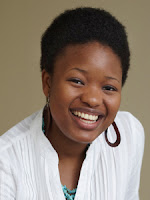 About the Author: Chibundu Onuzo was born in Nigeria in 1991 in Lagos and is the youngest of four children. She is a History graduate from King's College London and is currently an MSc student in Public Policy at the University College of London. When not writing Chibundu can be found playing the piano or singing. Barbara Kasumu of the Telegraph writes about Chibundu:

Chibundu Onuzo started writing her first book aged 17, got an agent at 18, became the youngest female to sign to publishing giant Faber & Faber at age 19, and released her first book The Spider King's Daughter at 21. All whilst studying for a history degree at Kings College London. [Source]