246. The Palm-Wine Drinkard by Amos Tutuola*

Amos Tutuola's The Palm-Wine Drinkard and his Dead Palm-Wine Tapster in the Deads' Town (Faber and Faber, 1952; 125) is a string of fantastic occurrences or linked folkloric tales. The happenings are, like all folktales, incredible, colourful,  and entertaining with a moral lesson, of sorts. The story opens with the main character and narrator introducing himself to readers. He says:

I was a palm-wine drinkard since I was a boy of ten years of age. I had no other work more than to drink palm-wine in my life. In those days we did not know other money, except COWRIES, so that everything was cheap, and my father was the richest man in our town. [7]

From there on the Palm-Wine Drinkard, whose name the reader never gets to know but who referred to himself as 'Father of gods who could do anything in this world', narrates a journey he embarked upon to bring back his dead palm-wine tapster from Deads' Town. The fantastic and mysterious events that took place on the journey and how he managed to overcome them are the subject of the story. In one of his several escapades he rescued a girl who had had followed a 'complete gentleman' into an evil forest from which she never returned. After this saving her he married her and the two together continued the journey into the unknown town in search of the dead palm-wine tapster.

Their encounters with spirits, demons, red people, giants, dwarves, are stories that will titillate a reader's mind. They signify the African's way of storytelling, his belief system and his ways of transferring values and norms. Narrated in the structure and mode of traditional folktales, they sometimes provide reasons why certain things are as they are. For instance, in one of the towns he went he was asked by a man that in order to show him where his dead palm-wine tapster is he has to bring back death. With his juju, trickery and some unidentifiable providence, he was able to capture death in a net; however, when he threw death down the net broke into pieces and he escaped and started roaming the world because he is homeless. This is one of the functions of stories in Africa - providing answers to the mysteries of the world.

Other lessons one could draw from the stories are that people do take advantage of others and make promises that they cannot fulfil. Alternatively, people will usually befriend you mostly because of what they can gain from you and if that is no more they leave. The narrator had several friends because he provided them with several hundreds of kegs of palm-wine; however, all his friends left him when the tapster died. Again, when he returned from his journey and brought with him an egg that provides all that one needs, they came from near and afar to benefit from it; but by then he had knew better.

The protagonist was helped, in addition to his juju and his trickery, by some unidentifiable providence. For instance, when he was tasked to rescue the lady who later became his wife, he was able to see into the life of the Skulls who had captured her and also see back into the past the events that led to it. Thus, with this foreknowledge he was able to rescue the novel. These are the indicators of African folklore where everything is possible or where nothing is beyond the characters. The narrator's journey into the world beyond to bring back his tapster and Azaro's journeys into other worlds are indications of the vastness of the African's belief and the commonality of African folklores. For instance, the fight between the heaven and earth and commanding a cane (or belt) to beat ungrateful individuals are also to be found in Ghanaian folkloric tales. Further, in this story for instance, all spirits and dangerous creatures were personified.

However, what makes The Palm-Wine Drinkard and his Dead Palm-Wine Tapster in Deads' Town interesting and worth the read is not the fantastic folktales but the language in which it has been written in. Amos Tutuola wrote the story using an informal type of English language (or the Pidgin English). He neither paid attention to grammar nor semantics. In fact, a statement he made showed clearly that he was transliterating his story into English from another language.

[T]hen I changed the lady to a kitten and put her inside my pocket and changed myself to a very small bird which I could describe as a "sparrow" in English language. [28]

He shows that there are several ways to tell a story and that the elements of a good story are more than good grammar, perhaps rephrasing Mark Twain who 'never had any large respect for good spelling'. Though Amos Tutuola was criticised by some for this writing style, he nevertheless achieved much world fame by it. This book, one of Africa's 100 Best Books of the 20th Century, is worth the read.

Another African novel written in the mode, grammar-wise but not throughout the novel (limited to the protagonist's conversations), is Brian Chikwava's Harare North.
______________ 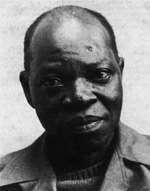 About the Author: Amos Tutuola (20 June 1920 - 8 June 1997) was born in Abeokuta, Nigeria, in 1920, where his parents Charles and Esther were Yoruba Christian cocoa farmers. When about seven years old, he became a servant for F. O. Monu, an Igbo man, who sent Tutuola to the Salvation Army primary school in lieu of wages. At age 12 he attended the Anglican Central School in Abeokuta. His brief education was limited to six years (from 1934 to 1939). When his father died in 1939, Tutuola left school to train as a blacksmith, which trade he practised from 1942 to 1945 for the Royal Air Force in Nigeria. He subsequently tried a number of other vocations, including selling bread and acting as messenger for the Nigerian Department of Labor. In 1946, Tutuola completed his first full-length book, The Palm-Wine Drinkard, within a few days. In 1947 he married Victoria Alake, with whom he had four sons and four daughters. (Source)

*Today is Amos Tutuola's birthday. He would have been 93 years. Click here for quotes from this novel
Author: Amos Tutuola Author's Country: Nigeria Novella Rating: 5.5 Review Year of Publication: 1951-1960