Valerie Tagwira's The Journey traces the unpleasant path a mother had to take to keep her family together and to raise her two children as a single parent. It shows how the vicious cycle of poverty traps individuals and sometimes vitiate them to levels they never thought was possible. Reading this story one realises that just as there seems to be no different between genius and insanity there is also very little distance between right and wrong and between 'Yes' and 'Never'. If there be a story that fortifies that saying 'never say never' this is it.

Shingai has lost her husband. She has gone for his pension, and after refusing to share it with his family, had used it all up in two years. She has also lost her market space after she fell ill and had to hawk on streets. Now her rent is up and the only thing she has is the ring Tendai had given her. She decided to pawn it to pay the rent but the price offered her was smaller than the value she put on it. But Mai Tafa, the landlady is a woman of her words. Having before defaulted on her payment there was no second chance this time and Shingai just had to vacate the room. Packing her utensils and suitcases, Shingai went to live with Nellie, her friend. The uneasiness between Shingai and her in-laws, especially Amai, Tendai's mother, prevented her from going to them in this time of need.

Stretched to her elastic limit, Shingai gathers courage and approaches her in-laws for help. In fact, when Shingai fell sick and was unable to go to work, her father-in-law had provided for her and had paid the rent too but Amai had staunched that source of income when she found out. Now in the absence of her father-in-law Shingai has to deal with this difficult woman who is not prepared to let the past go. Hence, it doesn't surprise her when she refuses and in doing so shatters any hope that she has held, if only she had had one. To relieve her of the burden of having to sponge with her children and knowing that Amai loves her grandchildren, Shingai asks her if she can take care of them for her, in the interim, of which Amai agrees.

Free of the children now, Shingai has to struggle to survive. Because survival is a basic human instinct and one will do anything necessary to survive, after several debates with Nellie - including the issue of its morality and its rightness - Shingai borrows Nellie's skimpy clothes and set out into the night. Prior to her setting out, Nellie had shown her all the tricks: how she should do everything the policeman will say if accosted by one, how she should sway her hips, how to identify customers (the taxi will pack and leave their lights flashing); Nellie had also given her a pack of condoms and a knife to threaten customers to refuse to pay.

A car parks, the lights flashing. Shingai has a customer. But this turns out to be the police. She commands her to stop and stop she does. Officer Santana searches her bag sees the knife and the condom, pulls her closer and then into the shadows, deeper. But to avoid force, Santana offers her a choice

You have condoms, don't you. If you give me a quick one, I haven't seen you, and I haven't seen the knife. Hey, I can even take you home. ... Or, I can book you in for soliciting, carrying dangerous weapons and threatening an officer. What shall it be?'

And the choice is clear to Shingai, there is no choice. 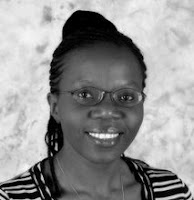 Valerie's story  shows the crooked path of life and the choices we take. Though Shingai seemed to have been presented with no option to choose from she all the same bears the consequences. It reminds us that our judgement of people should not be severe because we might not know what had taken them there.
_________________
About the author: Valerie Tagwira is a Zimbabwean writer currently working in London as a medical doctor. Her first novel, The Uncertainty of Hope, was published in Zimbabwe (Weaver Press, 2007) and in South Africa (Jacana Media, 2008). The novel won the The National Arts Merit Award for Best Fiction title in Zimbabwe (2008). She has had two short stories published. (Source: the anthology)
Anthology Author: Valerie Tagwira Author's Country: Zimbabwe Rating: 4.5 Review Short Stories Year of Publication: 2001-2010