167. Madmen and Specialists by Wole Soyinka 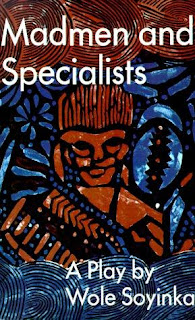 Read for the Africa Reading Challenge

Wole Soyinka's play Madmen and Specialists have made me think twice about this genre. This is the first book I can boldly say 'it went over my head. I never got it.' Perhaps it was the mentality I carried into the book: I went into the book knowing that Soyinka's plays have deeper meanings other than its superficial mirth he creates with verve, which burdened me so that after three days of labouring through a 77-page book, finally turning over the last page, I still could not put the various issues together to create one coherent idea. This play, which was written when the author was in prison during Nigeria's Civil War, is sad and gloom, unlike The Lion and the Jewel.

The story opens with a quartet of mendicants: Aafa, an arrogant, sarcastic and self-style leader of the four, Goyi who was somewhat positive or optimistic and appreciative and had a contraption that held him in stooping position, Blindman and Cripple wagering parts of their bodies in a dice game. These four beggars had become afflicted during the war and had now set up their camp on a route that led to Dr Bero's house and would do anything to get people to give them money including faking paroxysms. Together with Dr Bero, the quartet had formed the Cult of As. Dr Bero, who was once a physician had become a Specialist in torturing people during the war. This had had a psychological effect on him. Back home he had kept their raving and demented father in a room, like an oubliette, and had tasked the quartet mendicants to keep watch and prevent his sister from entering the room in which their father was kept, even though Si Bero did not know the condition their father was in and also did not know that his brother had retuned from the war. However, overlooking them were two old women: Iya Agba and Iya Mate, who had helped Si Bero keep her brother's practice going in his absence. The Cult of As, under the influence of the demented Old Man had become cannibals for it was the idea of legalising the eating human flesh that pushed him, the Old Man, to join his son in the war.

Later, when Si Bero saw that her brother had arrived from the war, she asked him of their father. He initially lied flatly but she found the lie and persistently questioned him. Dr Bero was furious that the old women were living in that part of his compound and wanted them to leave and was even more furious when they demanded payment for helping Si Bero keep his concern going and yet would not state the form in which the payment should be. Here it was clear that even though Dr Bero was furious and threatened to sack the women, he never really was able to do carry it. Back in the room where the Old Man was hidden, a political discussion was going on amongst the quartet and the Old Man. They talked about politicians and their tricks, about promises that are broken just as they were spoken and they talk about whom to kill. Finally, Goyi would be trapped and offered for food. During all these, Dr Bero was thinking of ways to kill his father; perhaps they were both mad men and specialists.

The story seems to be about the political inefficiencies, the selfishness of the politicians, their greed and their double-barreled mouths that say a thing today and another a different day. It is about the inhumanity of their thought; as to what makes them do what they do, that went unanswered and I'm not sure Soyinka intended to ask or answer that question.

Have you read this book? Tell me what you think. Let this be an open review. I really would want to get more from this.
____________
About the Author: Click here.
Author: Wole Soyinka Author's Country: Nigeria Play Rating: None Review Year of Publication: 1971-1980