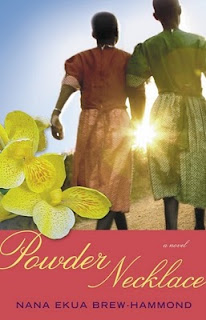 
Where is home? Where your parents come from? Or where you were born? Or where one chooses to call home? The quest for an identity, for belonging to a group, either based on colour or language or thought, has become a quest that has proved and would continue to prove insurmountable. It would be with us for many generations to come, until such a day when we shall wake up and say 'We are people of the earth'.

Powder Necklace is a coming of age story about a young girl whose divorced Ghanaian parents, living on opposite sides of the world (America and England), was herself born in England. Does she become English? Of course that's how she described herself, at least that's how she felt when her 'overprotective' mother sent her to Ghana after seeing her with a boy in their house. Lila, the girl in question, became furious and resented her mother for punishing her for something 'that didn't happen'. In Ghana, Lila refused to accept or respond to the phrase 'welcome come home' as most people she met greeted her with, when they saw her skin colour.

Though the novel does not claim to solve or has answers to the problems that children born in foreign lands undergo, its strength lies in bluntly portraying the cultural shock these children go through when forcefully plunged into these strange lands of their parents. The vast disparity in thinking and action between cultures and people, and in development and accessibility to basic utilities that make life comfortable such as warm shower, wears them down and begins to tell on every aspect of their lives. Yet, with time they adjust and become one with this strange place as Lila, even after all her complaints, made some friends, drank fermented kenkey with them, and began to lose her British accent.

Whilst in Ghana Lila attended Dadaba Senior Secondary School, (one of) the best secondary schools in the country; yet Lila complained not because she was choosy but because the best she saw truly couldn't compare with what she had left behind. And just when Lila felt she's settled in, her whimsical mother sent for her to be brought back to England but that wouldn't be her end. That not being her end of cross-continent travels. She was again sent to live with her father whom she had had a lackluster relationship. Ironically, it was with her ghostly father, a personality she knew only through his voice that used to boom through the phone ear-piece, that all pieces began falling together (not revealing anything here). All I would say at this point is that I personally don't believe that children are always right, for even though Lila thought her mother is only interrupting her life, not making her live the way she wanted, we observed that her thoughts were different from the reality.

Nana Ekua wrote this story like it is, portraying accurately how children always think that they are right and their parents are wrong; how they think they can manage their own affairs without any parental help or intervention but are quick to blame parents when problems begin to set in, when things refuse to go as they (the children) think they would or should or must go.

For instance, when Lila's respect towards her mother began to decline and her mother decided to send her away to her father, this is what young Lila said:

The imagery in the novel is so strong that the scenes run through the mind like cinema reels. The author did justice to all the cultural shock that she encountered and things that I usually take for granted took on new meanings. For instance, though I always read the inscriptions of cars and stores and kiosks, I never really considered their link to faith. Besides the imagery, the metaphors and similes were unique and not clichéd, at least according to my ears. This is how Lila described her 'lethargic' relationship with her father:

Ever since that day we'd spoken on the phone in Auntie Flora's flat, the day he'd told me he'd just had twins, my father had become to me like something I had left on the bus (page 195)

In writing this story, the author--Nana Ekua Brew-Hammond--who herself is a product of this cross borders procreation, did not think of hurting feelings or even portraying her story to suit her changing understanding and acceptance of issues. For instance, she still wrote about the ugly looking school desks, the dusty, bumpy roads, the bad odour at places, even when she realised that the country isn't all about that. These're what make this book an interesting read. No cover ups, no pretensions, writing things as they occurred to Lila and remaining true to all her experiences.

Writing in the first person singular, which makes the story read almost like a memoir, Lila was able to tell her story in a way that makes the reader feels as if he or she was Lila, feeling, seeing, smelling and sensing everything Lila felt, saw, smelled, and sensed and yet able to laugh at those that were laughable.

This is one of the few stories I have read that ring true to my ears. Powder Necklace, the first novel by Nana Ekua Brew-Hammond is a must read and I would recommend it for all.