36. Before I Forget by Andre Brink, A Review 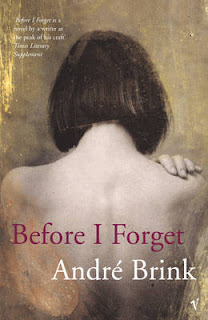 "You died at seventeen minutes to ten" is the first sentence in this reflective novel by Andre Brink, a two-time Booker Shortlist author of An Instant in the Wind (in 1976) and Rumours of Rain (in 1978).

The story, written in the first person but shifting between the present and the past, is a tribute by Chris Minnaar, a writer at the twilight of his life and career, addressing a loved one, who had just passed away. This love one is young Rachel who, though married, together with her husband, has kept Chris Minnaar, the first person writer and narrator, as a friend and a member of their family. Chris reminisces all the fun he had had with her and how he appreciated it. However, Chris intelligently tells his life story through this 'address' by digressing from a given point he is making or rather linking an incident he is describing with another that had happened many years past, mostly with the involvement of a woman. A romantic or erotic involvement as such. Yet, this digression seemed to be unintentional and the gap between the present and past is difficult to point out.

Though Chris Minnaar, hadn't written a novel or better still completed one since the mid-nineties he uses this address, this talk of his life to write something like a memoir. The book (or memoir) was written like the rantings of an old decrepit man, who is eager to record his lascivious deeds before he dies. As a result it is achronological, moving back and forth to tell the story according to how best his memory serves him. Again, since it is like a rant, an intelligent and readable rant, the book has not been divided into chapters but in un-numbered sections, marked by spaces.

With the many encounters with women, which almost always results in sex, one is likely to describe the book as sexist. But is the book sexist? May be yes! Emphatically no! However, it has a sex twists to every incident including the war in Iraq. This is what Chris has to say about the Bush's war in Iraq:

There may be much more behind the whole war than oil. Perhaps macho America is finally finding a way to break out of a terrible depression brought on by women's liberation and by the crushing blow inflicted by 9/11 on the two phallic towers that embodied the national male ego. A Bush in hand is worth two birds (Page 105)﻿﻿﻿

﻿﻿﻿Iraq may well be Bush's big wet dream, his passage into his own warped notion of manhood. It is sickening to behold (Page 121)

﻿﻿﻿﻿﻿﻿Besides, over ninety percent of the women in the novel had sex with Chris including a German lecturer Grethe who, as a visiting lecturer, had sex with thirteen (13) male lecturers and died of cancer a month later and a 'Hotnot' South African girl who had sex with both Chris and his father, when the Immoral Act was at its peak. There was also a girl who begged to be strangled during sex. This lewd representation doesn't mar the quality of Brink's prose. It elevates it, for he is able to handle his subjects with such dexterity that it salvages it from utter baseness.

Though some may feel the book to be filled with Freudian concepts, this is what Chris wrote concerning one of his relationship with a particular lady

... I was up in arms with her, against the world of men deranged by testosterone. I wanted to protect her, I had to protect her; and for once the very fact that she was beautiful, and vulnerable, ensured that I would never dream of taking advantage of her... (Page 142)

﻿﻿﻿﻿﻿﻿﻿﻿And Chris Minnaar is neither a sexist nor patronising of his women. For it was after his non-amorous encounter and friendship with Rachel and his husband George that he realised, perhaps, the futility of his earlier libidinous encounters; that he realised that marriage, after all, may have something good in it.

Again, the book isn't all about sex and wine and fun. It was written on the backdrop of a country that was struggling through political uncertainties: the Sharpeville event, the Soweto '76 crisis, and the release of Mandela. The narrative-author, Chris, had a lot of bushes with the government of the day in relation to what he wrote in his novels.

Chris's main interest in writing about his life is because of his amnesiac mother, who at 102 years couldn't hold one regular conversation with his son without digressing. Thus, Chris at 78 years wanted to write down his deeds before he forgets, like his mother. However, his mother, even at that age spoke of freedom that was denied her and it was something that came up constantly in her irregular conversations with her son. This is what he said to Chris during one of his visits to her at her old age home

Nobody said a word about his philandering. They all looked up to him, envied him. But if I dare to go out with a man on a Saturday night, even if it is for a meal or a film, all the fingers point at me (Page 280)

And this was after the death of her husband.

My problem with the book is that, scenes are too predictive. One can easily guess what would happen to a lady who has just been introduced into the story. There were some diversions but they didn't pull me in. And this made the scenes and the telling to monotonous. I also think the character, Chris, could have been more complex. Besides, it took too long for us to know what really happened to Rachel and even when it came it was like a sentence or so long.  In effect, I enjoyed Praying Mantis more than I enjoyed this.

However, there is a lot to be learnt from this novel and  I would recommend it to any reader. But if you detest reading about sex please don't read it, though it is not so detailed and too graphic to cause much discomfort.