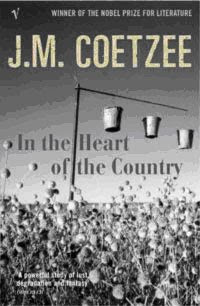 
"Today my father brought home his new bride."
This is the sentence that set the novel, In the Heart of the Country, in motion and around which every deed in the novel revolves. Set in one of South Africa's remote farming communities, the novel, written in the first person's narrative style and in the present tense and set in the form of journal entries with numbered paragraphs, tells the story of how an old and psychotic virgin, Magda, killed her father and her father's black mistress, Klein-Anna, whom she describes as the new bride, but who in actuality was the wife of Magda's father's servant, Hendrik.

In the novel, Magda writes of killing her father in two very different scenarios. In the first scenario, she kills her father together with his mistress with a hatchet, whereas in the second instance she shoots him and left him to his eventual death.

Magda consistently rues about her inability to love and be loved, her ugliness, her frustration of having not had sex and not knowing how it feels like to have it and therefore having not become a woman like Klein-Anna, though she is far older than her and usually referred to her as 'child'. However, Magda's active mind, romanticized and lusted after Hendrik always thinking of how Hendrik was going to have sex with her forcefully and it wasn't after the death of her father that she allowed Hendrik to humiliate her sexually and even in her humiliation she begged for more: to be satisfied. But did all these happened?

Pain and pleasure was one of the themes the novel explored. However, in all of these pleasure seemed to be a faint thing and even where they occurred they were overcome with pain. This characteristic made the novel  dystopian and distressful:

"Pleasure is hard to come by, but pain is everywhere these days, I must learn to subsist" (page 38).

Each paragraph is like a jigsaw puzzle which, in most cases, tells of a different activity than the preceding entry, but which together forms the complete story of Magda and her fantasies. The borderline between psychosis and reality was so blurred that it was in the end that it is seen that perhaps Magda's father wasn't dead and that she is alone in the middle of a vast countryside home shut behind a series of bolted rooms all alone and ruing.

Even though the novel provides the life account of a psychotic unmarried woman who has a "hole that has never been filled..." there are several instances where the book provides the psychology behind human behaviour, which I found it hard to have been conceived by a lonely mad woman. For instance concerning her father's love for his servant's wife she stated that:

However, psychosis and genius have had little point of departure. In the Heart of the Country being the second of Coetzee's novels I have read, after Dusklands, makes certain aspect of his writing clearer to me. His use of sounds: alliteration, assonance and rhyme are very unique though subtle. Coetzee's writings also depict him as someone who have enough knowledge in many different fields of study.  He provides examples of issues from varied fields ranging from Music, to Mathematics, Physics, Psychology and many others. Only about ten percent of the novel involves dialogue.

Whilst I was reading this novel, an idea struck me: what if this is an allegory of man's suffering on earth? This novel is highly recommended and though I have not read his more popular novels, I believe Coetzee is worth a reading.
Author: J. M. Coetzee Author's Country: South Africa Nobel Laureate Novel Rating: 4.5 Review Year of Publication: 1971-1980