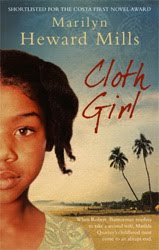 Set in the Gold Coast between 1937 and 1952, Cloth Girl is a story about love, distress, heartbreaks and regrets. Cloth Girl is a story about a fourteen-year old girl trapped in a polygamous marriage for which tradition and convention demand that she remains silence and counts her marriage as a blessing, for what a woman should expect from marriage is not love, but children and a husband to take care of her children.

Seizing their chance to be associated with the prominent Bannerman family, the Lamptey family accepted  marriage proposal from Lawyer Bannerman for fourteen year old Matilda. At such a young age and being a woman, Matilda did not have a say in her marriage, though it concerned her life. However, Matilda, who was to become a second wife to this prominent Gold Coast lawyer with degrees from Cambridge could not construct a complete sentence in English and had to compete with lawyer's first wife, sophisticated Julie, a woman who was out of touch with tradition and so would not accept her as her husband's second wife, and hence a co-wife, for lawyer's attention, affection and love.

Whilst Matilda's life was unfolding before her, Alan Turton, a British citizen serving in the colony was also having serious marital problems with his wife, Audrey Turton, who was determined not to be happy with life in the colony. Audrey hated Alan, for bringing her into this cesspool of uncivilised people who urinates into open gutters, eats food infested with flies and who are infected with unnamed diseases; into a place where the weather is so hot and the earth so barren. Audrey hated everyone who was in the colony, or related to it. For instance, she hated the King of England for even deciding to civilised these people who cannot be civilised, Hitler for embarking on the World War, just when they (she and Alan) were about to set sail to England, the people in the colony for needing to be civilised in the first place. Later, she resorted to heavy drinking and smoking.

However, Matilda's and Audrey's lives were to meet at a point that was to determine their individual destiny. How could the life of a girl whose command of the English language is so poor that she grins foolishly at every word that is uttered and who lives at Jamestown, a typical Ga settlements, give hope to a hopeless and drunk wife of the ADC to the governor, a woman who had walked on the verge of madness and lives in the European quarters and who moves among the glitterati of the colony including the Governor of the colony?

This is how complicated Marilyn's debut novel is. It is absorbing, suspenseful, and  a difficult-to-put-down novel. Marilyn's description of the traditional Lampteys, the semi-western Bannermans, and the western Turtons and her command of tradition are indicative of someone who has been on both sides of the divide and understands both with equal measure. In the novel, Matilda's father was a sidelined figure as is the case in most families that practice the matrilineal inheritance system in Ghana. In such an inheritance system, a man is responsible for his sisters' children so that whilst Matilda's blood father, Owusu, was alive and around, Saint John, Matilda's mother's brother, served as the father figure for Matilda, giving her up for marriage and attending to familial issues that require the attention of a man.

This is a very beautiful story of life in a polygamous marriage well told by someone who has done here work well. The story elicits the right emotions, taking the reader through an emotional roller-coaster: at one breadth hating Audrey whilst sympathising with Alan and at another time having a reverse of these emotions. It was easy to pity Matilda through until she allowed herself to be misled (though not entirely her fault). 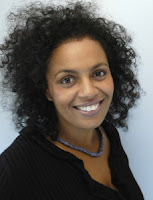 Whereas Cloth Girl tells the marriage and life story of Matilda (and Audrey) it is also a story about two women who want freedom, respect and love in very diverse forms. This is a book I would highly recommend to all those who love to read and all those who enjoyed Buchi Emecheta's The Joys of Motherhood. My only problem with the novel is that sometimes I think Matilda's thoughts were a bit deep for a 14-year old, but even so it did take nothing from the enjoyability of the novel for the 1930s were the period where people take on family responsibilities earlier and women, especially, were encourged to mature early for marriage. Also, I believe the publishers could have done more considering the numerous blunders they committed, such as an O with an accent on the top as a symbol for inverted commas ('). On one occasion the reader had to jump a page to continue a sentence and later come back.
______________________
Cloth Girl was shortlisted for the Costa Awards Debut Novel of the Year in 2006.
Author: Marilyn Heward Mills Author's Country: Ghana Novel Rating: 5.0 Review Year of Publication: 2001-2010