224. Speeches that Changed the World by Emma Beare (Editor) 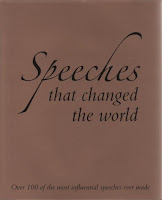 Speeches that Changed the World (Bounty Books, 2006; 192) edited by Emma Beare is a collection of speeches, interviews, dialogue and one-liners that are supposed to have marked an epoch in time. Sometimes these epochs are not long-lasting and the speeches not-world changing; sometimes the reverberations of the outcomes of the speeches can still be felt today, like John F. Kennedy's speech that empowered NASA and sparked the space race, which promised that America will put a man on the moon before the end of the 1960s and did. Today, Curiosity is on an exploratory tour on Mars.

However, some of these speeches are there only for their beauty; this is the case in most of the one-liners - like the ones by Princess Diana - whose significant impact on world cannot be determined. Same can be said of Mark Anthony's speech delivered at the death of Caesar. The collection is mostly West-centric and not comprehensive enough. The only Africans in there are Nelson Mandela and F. W. de Klerk.

The collection is divided into ten sections: Ancient History, Love, Religion, Science, Patriotism, Philosophy, Humanity and Liberty, Sport, Politics, and War. Contributors ranged from Woodrow Wilson to Hitler, Mandela to Einstein, John Kennedy to Thucydides, Mark Anthony to Karl Max and more. Where the speeches are longer than is necessary, the 'irrelevant' parts are edited out whilst still maintaining the import of what the speech is about. Some of the entries were also not penned by one person though they have had major impacts on the world like the Universal Declaration of Human Rights by the General Assembly of the United States.

Whilst not comprehensive enough (but including George Bush's Axis of Evil speech), the editor could have shown in the footnotes in a sentence or two what impacts the entries have had on the world. This would make the reader appreciate them more. Future editions should be more inclusive and wider for the world has existed for a long time to more impactful speeches than those presented here.

Regardless, this will kindle further investigations and reading in the reader, if he were the inquisitive type. If not, the reader would learn some bits of history, however edited they are.
Country: United States of America Editor: Emma Beare Non-African Non-Fiction Review