NEW PUBLICATION: Sin is a Puppy that Follows You Home by Balaraba Ramat Yakubu*

Beginning in the late 1980s, northern Nigeria saw a boom in popular fiction written in the Hausa language. Known as littattafa soyyaya ("love literature"), the books are often inspired by Hindi films - which have been hugely popular among Hausa speakers for decades - and are primarily written by women. They have sparked a craze among young adult readers as well as a backlash from government censors and book-burning conservatives. 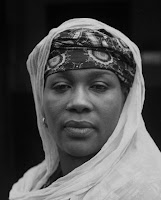 Balaraba Ramat Yakubu has been one of the best-known authors in the genre since she published her first novel in 1987. She has also written, directed, and produced films for Kannywood, the Hausa-language film industry based in Kano, Nigeria.

Sin is a Puppy that Follows You Home is an Islamic soap opera complete with polygamous households, virtuous women, scheming harlots, and black magic. It's the first full-length novel ever translated from Hausa to English. And it's quite unlike anything you've ever read before.