Butterfly Dreams was shortlisted for the 12th Caine Prize for African Writing Prize in 2011. It was part of the crime anthology 'Bad Company' published by Pan Macmillan SA in 2008. It has also been included in the Caine Prize for African Writing 2011 anthology To See the Mountain and other stories.
Beatrice Lamwaka's story is a sad one. It is a story that represents the true story of many children caught in the unending conflict between the Lord's Resistance Army and the Uganda government in northern Uganda. This conflict has left in its wake many rape victims and child soldiers. And those who escape from their abductors are left traumatised, needing rehabilitation.

It is within this setting that Lamwaka's story is set and told and eleven-year old Lamunu is one of such children. Like all children Lamunu also had a dream, a dream to become a medical doctor and take her mother's profession a step higher. Consequently, she loved to learn. She loved books and would brace everything to be there including news of abduction that would lead teachers and other pupils locked in their homes. Unfortunately, one evening the rebels invaded the village of Akololum and amongst those abducted was Lamunu.

From the story we see that though she had been able to escape from her abductors after four years in captivity, Lamunu suffers from post-abduction disorder. She refuses to talk to anyone and reacts badly to any booming sound of a passing plane and helicopter. However, the narrator drops pieces of information regarding what Lamunu have done and what have been done to her whilst in captivity. For instance, we get to know that she was forced, together with others, to beat a girl who tried to escape to death. Again, by mentioning the names of people who have gone through similar experiences we find that Lamunu's experience is not unique; it's almost become the norm.

Another angle to the story is the effect of the conflict on the life of the people: the once vibrant village of Akololum had been turned into a camp and the farmers, including Lamunu's father, who could in pre-war days feed their family to excess, now have to depend on donations and hand-outs from Non-Governmental Organisations and on food which they used to give to their dogs. In some way the story also shows resilience in the face of adversity; for Lamunu, after spending her youthful life in captivity, still kept her focus on her dream of becoming a medical doctor, enrolling in school again. Emotions have been bottled up, each person afraid of raising or asking a question that would open healing wounds. Yet, the urge to know more was high. The fear and anxiety could actually be felt off the pages.

Written in the second person addressing the protagonist, the story could have taken place entirely in the narrator's mind or it could have been epistolary, though the latter is not supported by the facts presented. And it is this writing style that brings to the story its weaknesses, in addition to it being part of the usual story of Africa. For instance, though it almost sounded as if the narrator did not know what the protagonist might have done or gone through, because she was non-communicative, there were places where she actually described some of these. Besides, there were shifts in focus from the suffering mother and coping family to Lamunu attempting to fit in. And again the second person did not seem to work at many places. The tense, past or present, was difficult to pin down. Then the story itself: it is not unique. It is about abductions, child soldiers, rebels, camps, NGOs and more and these are portrayed, more grisly, on our Televisions. 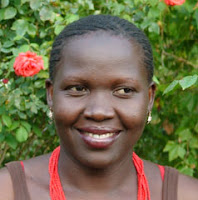 About the Author: Beatrice Lamwaka is a teacher and writer. She graduated from Makerere University with BA (ED) Literature and English Language Studies. Her published works include "Vengeance of the Gods," a short story Published in ‘Words From A Granary’ An anthology by Ugandan Women Writers. ’Queen of tobacco’ Gowanus Books. Her poems have been published in various anthologies. She is one of the pioneers of a British Council writing scheme to link Ugandan writers with established writers in the UK. She is a member of Transcend Art And Peace (TAP) an organisation that supports creativity and art in working for peace. She is also a member Of Uganda Women Writers Association. Her Novella ‘Anena’s Victory’ is awaiting publication with Fountain Publishers. She is currently working on her first novel ‘Second Home’. She works with Uganda Bureau of statistics. (Source)