117. Tail of the Blue Bird by Nii Ayikwei Parkes 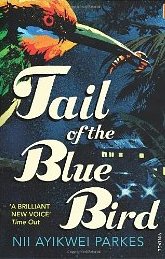 Tail of the Blue Bird by Nii Ayikwei Parkes is a whodunit of a unique kind. The story is about Kayo, a young forensic scientist who has arrived home after studies abroad to contribute to the development of his country. Having settled in, he realised that making it in this country is less a matter of what you have in your head than it is about knowing the right people and pressing the right buttons or greasing the right palms. Initially, with is profession as a forensic pathologist, he had applied to work for the police but was turned down. According to the police, a forensic pathologist is not their priority as current methods of 'interrogation' has worked and served them perfectly. Having resigned himself to working for the thrifty Mr Acquah, Kayo felt disappointed and underused. However, when a minister's girlfriend - visiting Sonokrom - came across an amorphous organic substance she suspected to be a leftover from a murder scene and after an initial attempt by nine police men and a pathologist to crack the case failed, a power-hungry police officer - whose eyes is on the position of the Inspector General of Police (the highest position attainable in the service, earned by political appointment only) began the search for Kayo. When the initial call to rope in Kayo to carry out his forensic investigation proved difficult because Mr Acquah wanted to charge of the said services even though it was not in his line of business, the police calmed him down with a secret of his. The way was then paved for Donkor, who sent his men to bring in Kayo. Blackmailed, coerced, threatened and tasked to bring in a CSI-style report on the case, Kayo set to work but the obstacles, the findings, the sheer weight of (mis)evidence and stories proved too much for science to unravel. Here is a science versus tradition case. Will Kayo's science save him or will tradition have its way? This is a multifaceted story with multiple dimensions and endings.

Unlike the many African books I have read where authors provide glossary of words at the end of the book or where definitions of vernacular words and jargon are provided just after their use, Nii refrained from explaining, defining, expatiating all the vernacular words or jargon he used, leaving it to the interpretation of the non-Twi speaker. This style of his gave the impression, right or otherwise, that the book was written for the Ghanaian and made accessible to the world. My admiration of this also stems from the fact that when Kafka writes he writes not for Africans though his works are accessible. And even non-understanding of these words will not take the meaning away from the reader.

The story begins with Yaw Poku telling the story of his life. The language here is different. The English feels like it has been directly transliterated from Twi, especially when one reads 'We were at our somewhere when she came ...' and it is interspersed with a lot of Twi words. Even the chapters are labelled after the days of the week in Twi. This part of the narrative also had a lot of proverbs and reflects the way language and words are used in everyday Ghanaian life. To the Ghanaian and perhaps African, proverbs and analogies play an important role in language and communication; so that, instead of answering a question, an adept communicator will tell a parallel story - as Yaw Poku did - and the listener was expected to understand and find his own answers.

The second narrative or writing style is a point-of-view. Here Nii wrote from Kayo's point of view, following him with his camera zooming in and out, presenting his fears, his aspirations, his seeming failure and more. The language here is very different, though it shares with the first person narrative (Poku's narrative) a kind of fluidity in its read.  Being the main protagonist of the story, this writing style allowed us to explore the individual, Kayo, in a way that a first person narrative, which in itself could not be trusted, might not do. Here there is less use of Twi words too.

However, in tune with the happenings in the country, Nii Ayikwei Parkes was able to employ several of the major characteristics of contemporary culture such as songs in the realm of Hip Life - a new generation music genre that fuses West African Highlife beats with Hip Hop or Rap. Such traces of contemporary life brought the story alive making the Ghanaian reader identify with the unfolding events even if he has to suspend belief for awhile in order to swallow the final scenes of the story. More importantly, descriptions of landscapes, institutions, behaviours, and reactions were so exact and spot-on that at some point I thought I knew exactly where Sonokrom is, especially for those of us who have stayed at Tafo before. This feeling was enlivened when Sunrise FM, a Koforidua radio station, was mentioned.

Nii Ayikwei Parkes has written a book that, like Morrison's Beloved or the more conspicuously Song of Solomon, expands the borders of what is allowable, in African novels. He shows that even in a hut-and-thatch setting, which early in the story made me fear that this might be one of those calabash stories, there could be science and that the African character is not all poor and hungry but also has scientific tendencies, something a lot of contemporary writers are shying away from or are failing to point out. Yet like Ben Okri, though comparatively Nii's use of the surreal is mild, Nii has created a sub-genre that is solely his; for how many times will one encounter a forensic pathologist working in a village where traditions are upheld and having been rendered incapable acquiesce to it?

Again, both sides of the narrative bemoans loss and inefficiency. Whereas in Yaw Poku's world it is the the surge in rural-urban migrating depleting the village of its human resource such that its culture is dying off and traditional occupations like farming, herbal medicine and hunting are left without practitioners, in Kayo's world it is the corruption of the individual and institutions that is bemoaned. Yet there is a kind of symbiosis regarding the causes of the problem with the urban corruption and inefficiency drawing people from the rural areas.

One dimension of Nii's writing I loved most is his ability to involve the reader by not releasing all facts at a go. Sometimes sections begin as if the reader had been privy to some information required to understand what was currently being said. This implied or implicit sharing information makes the reader work his way into the heart of the story and becomes part of it and not necessarily a passive recipient of unfolding events.

I purchased this book exactly a year ago and kept it for this moment. I have enjoyed this book very much and I therefore recommend it unreservedly. It is that book that should be read. Nii Ayikwei Parkes gives me hope that there is hope in Ghana's next generation of writers.
__________________
About the author: Early this year, precisely on March 22, I interviewed Nii Ayiwkei Parkes on ImageNations. Kindly click here for the said interview.
Author: Nii Ayikwei Parkes Author's Country: Ghana Novel Rating: 5.5 Review Year of Publication: 2001-2010