78. Fela, This Bitch of a Life by Carlos Moore 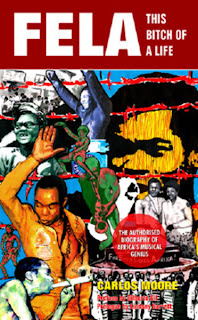 Fela, This Bitch of a Life is a biographical autobiography of one of Africa's most talented, philosophical and no-nonsense musician, Fela Ransome-Kuti (later Fela Anikulapo-Kuti or simply Fela Kuti) - a musical genius whose music ring true today as it did during their time of composition. Biographical in the sense that the author is Carlos Moore and autobiographical because Fela speaks in the first person, I.

Written in the first person - in the speech of Fela - Carlos Moore, a man who himself had been exiled from his country by criticising the government's race policies, treats us to a deeper, fractal, ever-controversial, sometimes contradictory mind of Fela. Fela, during the period when his life was at risk from the governments of Nigeria, called upon Moore to write down his life's works, his thoughts and his beliefs. In effect, Fela wanted to preserve his life before he dies, especially since he was thinking of 'cancelling his life'. Published in 1982, it was not until 1997 that Fela died and within this period a lot of incidences occurred that Moore has added in an epilogue.

Fela's musical career span over three decades. It began as Highlife Jazz, which was a mix of James Brown-like rhythms and Jazz. However, it was not until he met a girl named Sandra who introduced him to the struggle of the Black Panther Party and Malcolm X's autobiography in the US that Fela became political in his music, which led to the birth of his popular rhythms Afro Beats. Speaking through his songs for the masses and against corrupt governments of Nigeria, both civilian and military, Fela Anikulapo-Kuti - a man whose name translates as He who emanates greats (Fela), who has control over death (Anikulapo) and who cannot be killed by man (Kuti) - identified himself with the bourgeoisies: living with them and experiencing whatever they were experiencing. And why would a man who could have got anything he wanted live such a life? This was how enigmatic the man was. His elder and younger brothers were both medical doctors, his sister a head nurse in a private hospital, and his mother - Fumilayo - was perhaps the first African woman to visit the iron-curtain countries of USSR, East Berlin, and China and the first woman to drive an automobile in Nigeria. She was influential politically, organising women into groups to stress for their rights. And his father was a Reverend and a disciplinarian. Yet, Fela, believing he was an Abiku - or a twice born - chose to fight for the masses.

Fighting corrupt governments with songs like ITT (International Thief Thief); VIP (Vagabonds in Power); Zombie; Mr Follow Follow; Sorrows, Tears and Blood; Unknown Soldier; Stalemate, this musician of world fame sang songs devoid of euphemisms and metaphors that laced the songs of his mentor, James Brown, and his contemporary, Bob Marley. He received his most nefarious crackdown at the hands of his own Yoruba man, the former president of Nigeria - Olusengu Obasanjo. His communal compound, Kalakuta Republic, which housed all his bandsmen and women and people who straggled in in search of a place to sleep and be free, was raided several times. The greatest of these raids took place in February 1977 when most of his bands women - dancers and singers - were raped, beaten, broken, battered, and his mother was thrown out of the window. This was to later lead to Fumilayo's death. Fela's fight against government corruption is similar to that of his cousin, the Nobel Laureate, Wole Soyinka as written in his memoir You Must Set Forth At Dawn.

All these broke not the man. However, his resolve dropped a fervour and the artiste became slightly delusional and resorted to consulting spirits, when his mother died. Having always seen his mother as perhaps, the purveyor of his life-force, Fela became what the three thousand parental strokes and the uncountable police brutalities couldn't do to him. The man became broken.

One unique thing about Fela is that, his anti-establishment ideas, his fights for the common good of the common man, against the corruption of the day was not a way to gain popularity and earn profits. He was against the large music corporations who take music, commercialise it into a profiteering enterprise. He opposed this to his death and even when he lay in cold penury he rejected a multi-million dollar contract, seeing his mission as one of empowerment.

Carlos Moore's writing of Fela's biography is unique. The text are sparse and simulates how the musician, perhaps, speaks. In fact, Fela, when alive referred to the book as 'my book' and not 'the book about me'. As one read it one feels like he is the musician, for the texts are devoid of literary stylistics but presents the words  just as they had been spoken. The whole book reads like one great interview with Fela on several topics. Nothing is written in complex sentences as we don't speak in such winding and inverted way. Replete with the 'f' word and more, this is a highly recommended book for those who are not offended by these words.
____________________________
Brief Bio: Carlos Moore was born and raised in Cuba but banished for three decades from his native land as a result of his opposition to the racial policies of the Castro regime. He holds two PhDs in Human Sciences and in Ethnology. He is an Honorary Research Fellow in the School of Graduate Studies and Research of the University of West Indies, Kingston, Jamaica.

Fluent in give languages - Spanish, French, English Portuguese and Creole), he went on to specialise in African, Latin-American and Caribbean affairs. His expertise is in the impact of race dynamics on society and on international affairs. Moore was involved with the initial phase of the Festival of Black and African Arts and Culture of 1977 (FESTAC), working in Lagos, Nigeria, where he came into contact with legendary pan-Africanist and musical genius, Fela Kuti, whose biography (This Bitch of a Life) he wrote in 1982. (More Here)