Ode to a Broken Statue--Dedicated to Osagyefo Dr Kwame Nkrumah 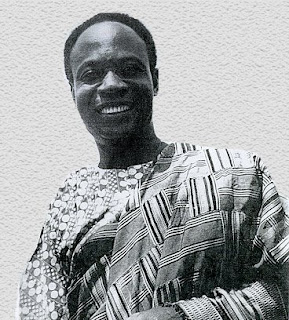 In the land of Nkroful, a Nazareth
In faraway Nzema, you, Nana Amaga, were born.
As a lonely limping quintessential lamb
You fought fiercely not for your few needs
But against their deadly deeds
And incredulous creeds, carefully and
Shrewdly shrouded in shallow showmanship
Of great guiles and glamour guns
The grand gods of Shaka the zealous Zulu and Zeus
Saw sprouting spirit of spotless selflessness
And imbued in your budding bones
Our relentless requests for liberation
They dipped you into a cauldron of ichor
And unlike Achilles, it covered every shadow you shed
Rushing through every vessel
They tied your plasmatic placental pipe to theirs
And their poetic tongues with yours
Making you their earthly linguist
You washed your hands in the pot of rainwater
Wedged between the folds of the Nyamedua
And so dined with them their ambrosial food
From there your manhood was affirmed…
Confirmed by the
Ageless sage who supervised your
Rite of Passage…
Hence you took the forms of both the Magi and Moses
Seeing Canaan in Egypt before he was set sail
And the Messiah before the epiphany
Having tasted the giant fruits of divine wisdom
You vowed never to lose it
Nor be confused by a few men with mind obtuse
Whose blue bleary eyes were blinded by abuse
And misuse
From Kumbi Saleh
to Kangaba…Timbuktu
Cape Coast…Accra
You lived through the spirits of time
And harvested its wisdom within its interior plane
You were the reincarnation of Ra Nahesi
…Mansa Musa
…Sundiata…in one entity
Your brain was carved as complicated
And inconceivably complex as the spider’s web
With supreme intellect to the point of folly
You embraced bodily…boldly…both
Ancestral missions and astral visions lodged
Within the blackholes of Einstein’s space-time theory
Being the gods’ sacred soothsayer
You looked through the divine orb
And spoke of weaving our blood baskets
Intricately into the heart of the land
At the time of our birth on that Wednesday evening
But they only saw it fit to spit in your wit
Scared of losing their loins and groins to the lion’s longings
After our timeless wanderings in the wilderness
…after they’ve with poisoned spears pierced your humble heart
And fed your copious consciousness
Consistently to a series of kaleidoscopic conflagrations
Purposely established after your departure
Manufactured by those cheap cheating chaps,
We, stuck sons in sand-stars
Have surrounded and salaamed
In reverence before your bones
With a soul as hot as a bole of coal
Dutifully waiting for the prophecy
Seeking counselling in the sands of time
With ailing whispers of failure
As life flew through our clenched fingers
Into a god have we turned you
Into knowledge have we transformed you
And posthumously have we honoured your name
Blasphemously branded on all lips
Even bold ones…
Burning offenders of the season
As heretics of treason

Should we always see goodness after death?

Should decayed coffins bear the staff of sainthood?
When you sought mental emancipation
Through the burning of blood and bone
And the expositions of
Marcus Garvey,
Du Bois,
Malcolm X,
Martin Luther King,
George Padmore,
They only saw insanity in your queer quest
And together with unknown souls
Sold your soul to an unknown night owl
When like God in Newtonian vision
You let the light be
They saw only darkness
Their needs were of silk, milk and manna
Their weeds—
Che Guevara and his honour to Havana
Their Gye Nyame spirit
Was lost in the potholes of their minds
And from the Katanga valleys of Kinshasa
To the Soweto mines of Jo’burg
They killed our prophets
And traded their ivories to tool makers
Of faraway lands…
2006
This piece was written in 2006 but I post it here to celebrate the Republic Day.
Author: Nana Fredua-Agyeman Author's Country: Ghana Poem